Texas & Louisiana: Tropical Storm Imelda makes landfall near Freeport; up to 18 inches of rain expected in coastal areas including Houston, Lake Charles, and other cities

Tuesday, 9/17/19 1:00pm CDT: The National Hurricane Center says Tropical Storm Imelda has formed in the Gulf of Mexico just south of the coast of Texas.

Forecasters said in a Tuesday advisory that Imelda is at Freeport, Texas, and moving north at 7 mph. The storm has maximum sustained winds near 40 mph and is expected to bring heavy rainfall and flooding to the state.

A tropical storm warning has been issued for the Texas coast from Sargent to Bolivar.

Update: The @NWSNHC has classified the disturbance off the SE TX Coast as Tropical Storm Imelda. A Tropical Storm Warning has been issued along the coast between Sargent and Port Bolivar. The main impacts with this system remain heavy rainfall and flash flooding. #txwx #houwx pic.twitter.com/m7TLYs7kAn 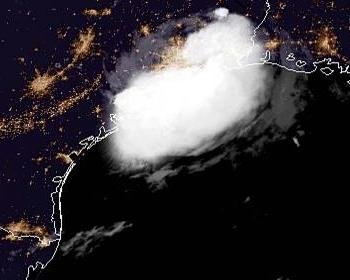