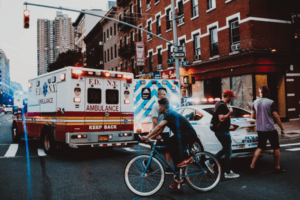 Here we are again, another disaster an another overloaded 911 system in Houston. The people doing this work are true heroes, but the technology is letting them down. Corporations know how to distribute traffic among multiple call centers based on traffic and demand, but the sprawling bureaucracy of locally commissioned and managed 911 centers (over 6700 of them in the US), are still struggling to determine cell phone location adequately, let alone move in the future where you could text 911, or overflow calls could be moved to the thousands of people staying up in parallel with no to few calls.

Is this hard? Does it have to tested? Yes, but not 10+ years hard; there has been a next generation effort for many years with no tangible results on the average PSAP (Public Service Answering Point). Lots of meetings, and a raft of people getting paid to squabble about it, but few results.

Other countries have s single 911 system that can be scaled, reconfigured, and respond well to these types of emergencies. Do a bunch of people have to die for forward movement?

Another huge opportunity for 911 is to send real time alerts to corporations and other organizations affected by a call. This gives them more time to prepare versus keeping them out of the loop. Imagine you are on floor 5 of a high-rise, and there is an active shooter on floor 8. If 911 knows, shouldn’t you? Portland, Oregon had a warning system like this in 1996 called Connect and Protect, and was featured in a WIRED story. It died from political infighting and bureaucracy.